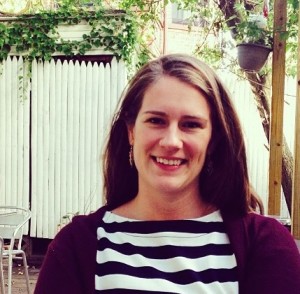 New Appleseed staff attorney Mary Ann Harvey has had a of lot interesting jobs: working with teen moms, as part of the housekeeping staff in Colorado where they cleaned everything with Windex, and as an English assistant at a school near Paris.

But the Lincoln native has come back to her hometown to use all those acquired skills to benefit people in Nebraska.

“I believe that every person in our state should have a fair opportunity to succeed in life and should have access to the resources they need to make that happen.” Mary Ann said. “While I was working in New York, I always thought about moving back to Nebraska so I could use my education and experience to work to make systems better in my home state.”

A graduate of UNL and Hofstra Law School, Mary Ann was a summer law clerk at Appleseed in 2009. In her current position she is hoping to combine litigation and policy to create effective pathways out of poverty for everyone in Nebraska.

Some of her bigger projects will be focusing on childhood nutrition programs and making sure adults have access to educational programs that will help them achieve a living wage.

“When I worked with youth in the foster care system, I realized that I had a passion to work for justice on behalf of people in vulnerable situations,” Mary Ann said. “That realization led me to law school where I focused on social justice issues.  Working for three years doing direct representation in New York City inspired me to want to help change things for the better on a broader level, which led me to Appleseed. I’m passionate about justice for people who are often overlooked. I feel very lucky to be working here now.”

Nebraska Appleseed’s newest Child Welfare Program Associate, Becca Brune, has been to a lot of different places. But for her there’s really no place like home.

“I’ve lived in England and Washington D.C. for a semester each during school, but have always been happy to come back to Lincoln,” Becca said.

A recent graduate of Nebraska Wesleyan University, Becca was influenced to work with children when LB 216 was passed while she was an intern with State senator Amanda McGill.

“When I was in Senator McGill’s office I saw all of the important parts that must come together for the passing of a bill that can have such profound change on a group in Nebraska,” Becca said. “I learned a lot about the hardships that young adults, not much younger than I, face when they age out of foster care. These stories, many of them I heard first-hand as testimonies, really stuck with me. But also the way that these many parts came together continued to inspire me to want to take a role in widespread change.”

As a part of her position at Appleseed, Becca will get the chance to help implement the Bridge to Independence program, continue work with the Indian Child Welfare Act and improve children’s access to behavioral health services among other things.

“I have always loved being around kids, so ensuring that they have a fair chance at a happy and healthy life has always been a priority of mine.” Becca said. “Another issue area that I have tried to help bring to people’s attentions in Nebraska, is human trafficking. The connections between foster care and human trafficking are alarming so I am anxious to continue to help raise awareness on this issue. By always striving for justice and equality Appleseed has been an organization I admire and am proud to work for.”