Here is the story of former Nebraska meatpacking plant worker Teresa Martinez, which is similar to that of thousands of people who work to put food on our tables.

My name is Teresa Martinez.  I worked at a meatpacking plant in Nebraska for four-and-a-half years.

I packed hams for eight hours a day, 40 to 50 hams every minute. The processing line moves tremendously fast and doesn’t stop. 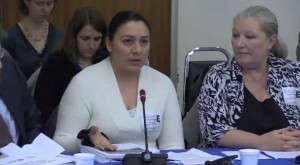 After just three years I had to have surgery. When I had pain and warning signs at the beginning and reported it, they only gave me pills and ice to stop the pain. Eventually it started hurting so severely I couldn’t raise my arm. At home I was unable to do simple things like lift my baby or sweep the floor.

The surgery didn’t work. Now two years later, I still wake up from intense pain. It feels like the nerves are twisting, I can’t move right, and I want to just remove that part of my shoulder and replace it with plastic.

The recuperation from surgery was long and difficult, and when I returned to work they assigned me to the same position as before and the supervisors continued to hound us to work faster and speed up production.

What I wanted when I worked at the plant was to be treated like a human being and not like some replaceable machine.

On my part of the line there were usually eight people, and I remember all of us were working injured.  But supervisors didn’t care about people, they cared about production. I know a lot of people working at meatpacking plants and many, many have had surgeries.

When I was efficient on the line, giving it 100 percent, I was nominated on four occasions as the Employee of the Month. When I started complaining about the pain in my right shoulder, that’s when they started cutting back my hours and pressuring me to work faster, even though I had pain!  I eventually stopped working in order to take care of my premature baby.

If I were to be asked to go back to the meatpacking plant I would say, “No, because the speed of the line is slowly killing their workers and when the employees are injured they are not treated with dignity.”

How am I supposed to live with this pain? The doctors say the pain is permanent, that they have done everything they can. I have dreams and a family. The speed of the line broke my dreams.