Four surgeries and disabled after 8 years working in meatpacking plants

Here is the story of former Nebraska meatpacking worker Juan Martinez, which is similar to that of thousands of people who work to put food on our tables. 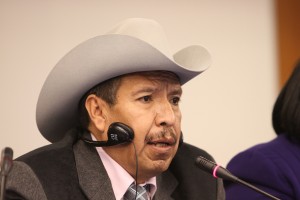 My name is Juan Martinez.  I worked in Nebraska meatpacking plants for more than eight years.  I used knives, trimming ribs for four years and heavy shoulder clods for another four years.

I’ve had surgeries on both hands and two on my back and many hours of therapy, but the pain doesn’t stop. My hands lost their strength and grip. After my back surgery, I lost my strength in my legs.

Imagine being disabled at the age of 41.

Working on the line, the speed takes a toll on your body. You make the cuts again and again. The line runs so fast, and it doesn’t slow down when other workers are absent. Then you have to work even faster.

Each day I made thousands of cuts, motions that repeated every shift. My hands became inflamed.  My fingers locked.  I broke three disks in my back from lifting heavy buckets of meat and fat every day.

My friends who reported their own accidents have lost their jobs.  Others hid their injuries because they feared being fired.

I’ve come to learn that when you’re injured on the job at the packing plants, it becomes nearly impossible to find a job.

We need policies that keep the speed of work safe. I don’t want more people to become disabled just because they’re trying to do their job.

The speed of the line is killing the health of workers.