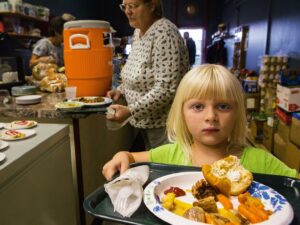 Right now, Congress is considering the reauthorization of the Farm Bill. While the name may make one think of fields and agricultural equipment, the Farm Bill has a far-reaching impact on programs that ensure food security and fight poverty in the United States.

The Farm Bill is a broad piece of legislation that addresses most federal food and agriculture programs. This includes the Supplemental Nutrition Assistance Program (SNAP), formerly known as “food stamps.”

While it might seem odd that SNAP is part of the Farm Bill, its inclusion has been important to get support from urban representatives that may not otherwise have an interest in farming and agriculture. It’s a way to bring urban and rural lawmakers together on the issue of food, which affects every American.

The Farm Bill is “reauthorized” every few years, and is set to expire September 30, 2018. Reauthorization is an opportunity to consider changes to programs, including SNAP.

On June 28, the Senate voted overwhelmingly with strong bipartisan support to pass a Farm Bill that reaffirms a commitment to protect SNAP.

The House of Representatives went down a different path, narrowly voting (213-211) on June 21 to pass a version of the Farm Bill that would increase hunger and hardship for thousands of Nebraska children, parents, seniors and people with disabilities.

The House’s proposal would punish SNAP participants through unforgiving penalties if they cannot meet new, sweeping work requirements. Children will especially suffer under the House proposal. If a parent fails to meet work requirements, the amount of SNAP a household gets will be reduced. This means taking food away from the entire household, including kids.

These work requirements don’t take into account how many hours their employers will give them, or if they’re unable to work because of a health condition but haven’t been given an exemption.

We’ve also seen in Nebraska people have been ruled ineligible for SNAP because of errors with the state’s paperwork and tracking system. A person could do everything right and still lose their food.

Over the next 10 years, more than 1 million Americans could lose food assistance under this plan, which ignores that public assistance programs like SNAP are often the only thing keeping families out of poverty while they are trying to gain employment or a better job.

This continues a disturbing trend of federal lawmakers attempting to make radical cuts to food assistance. The House of Representatives attempted to strip SNAP out of the House version of the Farm Bill in 2013, and the President’s budget proposed in February would have slashed SNAP by 30 percent, making it harder for millions of Americans to get basic meals.

The Farm bill now goes to a conference committee which will produce a final version of the bill be to voted on by both the House and Senate.

Most working-age adults that participate in SNAP who can work already do work. SNAP is crucial to helping people who are paid low wages make ends meet and put food on the table, as almost 15 percent of Nebraska households are food insecure.

Tell our Senators and your Congressman the final Farm Bill must not contain cuts or new restrictions to SNAP. These would risk the ability to get essential meals for Nebraskans who need them the most. Our delegation must maintain the commitment to ensuring Nebraskans get the food they need by opposing any harmful amendment that would cut or put new restrictions on SNAP.